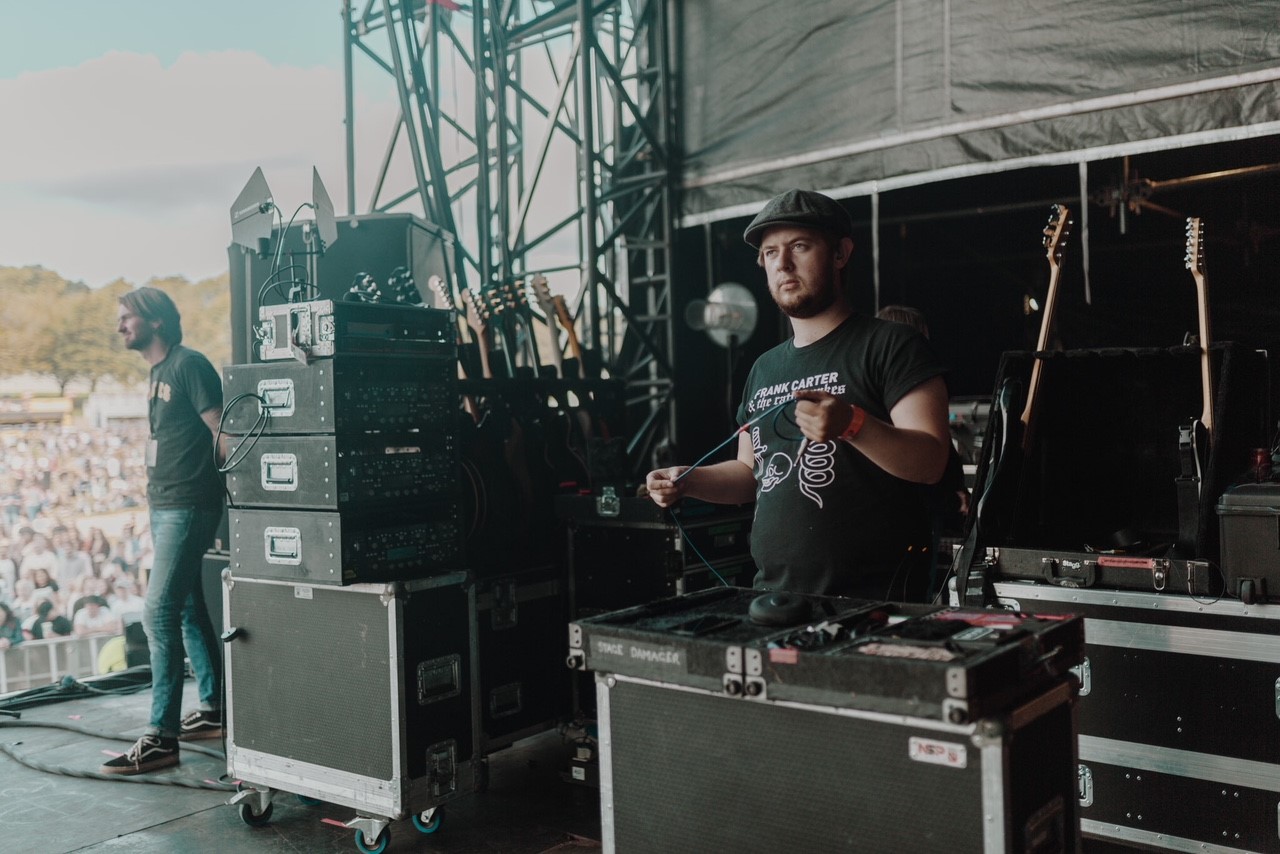 “I’ve now been Guitar Technician with Blossoms for about two-and-a-half years. This, along with some more networking, has helped me pick up work with Noel Gallagher’s High Flying Birds, Frank Carter, Shed Seven, Two Door Cinema Club and even Gerry Cinnamon!”

When Bob Munro left school, he decided to study electrical engineering at college, but he soon discovered however that his passion lay elsewhere.

While he was still at school, Bob had enjoyed helping out with lunchtime concerts and, outside of school, did some work with local drama productions and a wedding band.  When he realised that electrical engineering was not for him, a friend of his who was studying HND Sound Production at North East Scotland College encouraged him to rethink his career plans.

He said, “I loved being involved with live music and the sound production course sounded interesting so I applied.”  Soon after starting the course, Bob found that local venues around Aberdeen were keen to have NESCol Sound Production students involved in live shows.  He said, “”Being able to work in audio in venues whilst also working as a guitar tech was great.” It meant I was able to network with the bands coming through Aberdeen and I was soon getting some work with bands further afield.”  He took this to the next level in 2016 when Blossoms played the City.  He said, “I really got on well with them and was able to meet up with them at a music festival later in the year.  At the festival, I helped set up their gear because I remembered how they had it set up in Aberdeen.”  This impressed the band and they were keen for Bob to work with them.  He said, “I’ve now been Guitar Technician with Blossoms for about two-and-a-half years. This, along with some more networking, has helped me pick up work with Noel Gallagher’s High Flying Birds, Frank Carter, Shed Seven, Two Door Cinema Club and even Gerry Cinnamon!”

Bob is enjoying life on the road and is excited to see where his career takes him next.  He said, “I really love what I do.  There is a lot of travelling involved (which isn’t always as glamourous as it sounds!) but even when it is stressful I think how lucky I am to be there.  Also, with it being freelance work, your schedule can change without much notice so you have to be prepared for anything.”

Reflecting on how studying HND Sound Production has influenced his career, he said, “The course really helped me get my foot in the door of local venues which meant I could start networking with all the bands that were coming through. I’m definitely using the skills I learned while I was at college even though I’m not working on a sound desk as a backline technician.”