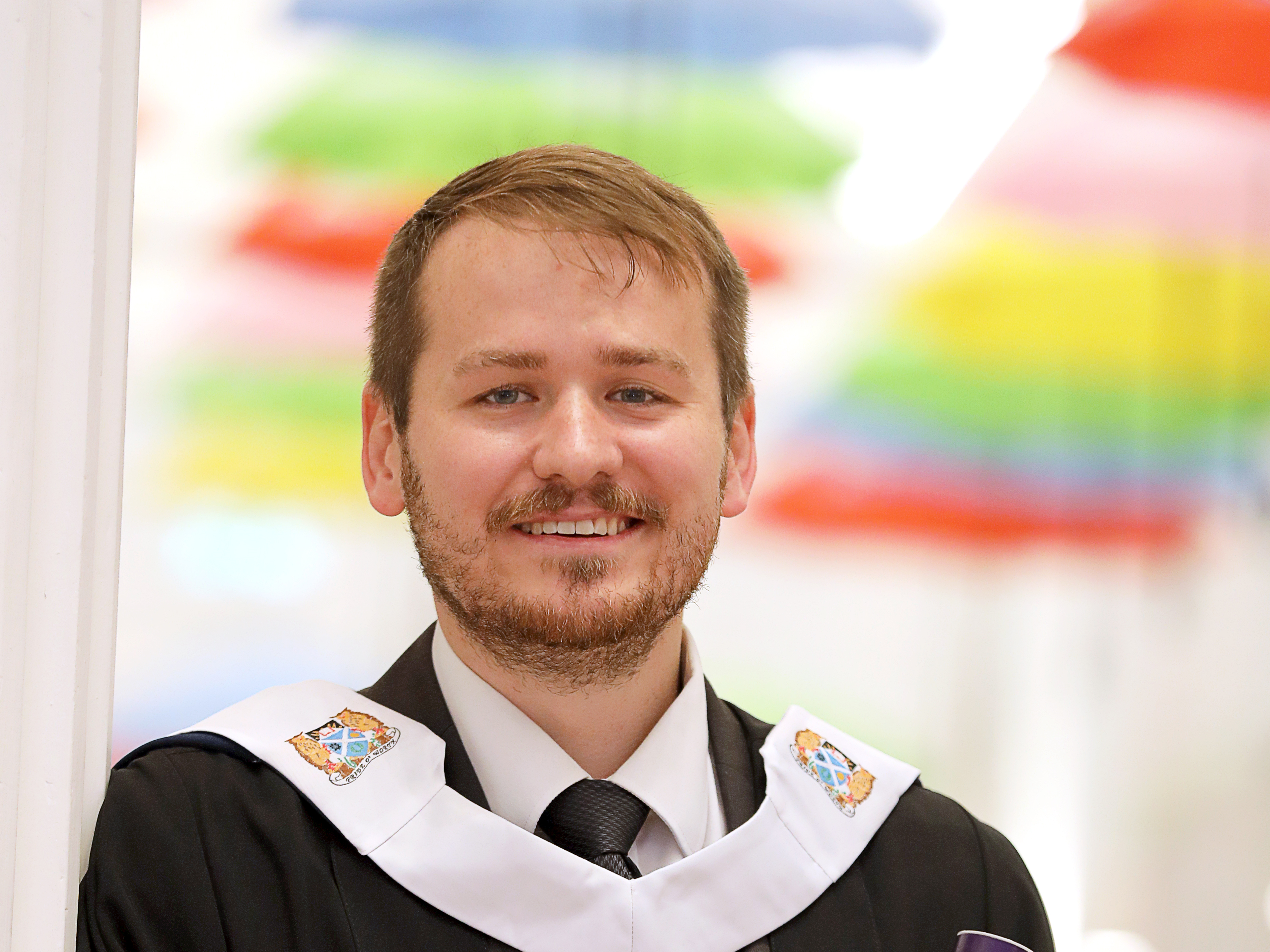 “Studying has been such a positive experience for me, challenging myself to learn new things when physically I’ve been limited has undoubtedly been rewarding for my mental wellbeing. I’m looking forward to learning more, achieving my degree and perhaps using it to go into teaching.”

Connar Duncan received his HND Applied Science at the NESCol Graduations and celebrates two years of hard work and resilience since taking the step back into education.

Connar (27) previously worked in the oil and gas industry as a CNC Machinist/Programmer, a job that he went into straight from school.  After the threat of redundancy loomed at his workplace, Connar decided to make the break and return to study to widen his career options. Science had always been an interest at school so he embarked on an HNC in 2020.

Although apprehensive to begin with, Connar handled the transition back to learning well and said, “Coming to College was a big change from working in a predominately male environment to interacting with people of all different ages and backgrounds but I really enjoyed it and was impressed both with the science facilities at NESCol and the lecturing team.“

Connar has a serious long-term genetic health condition called Von Hippel-Lindau (VHL) disease that means he needs to undergo periodic surgical operations.  Due to delays in medical treatment caused by the pandemic, surgery he underwent at the beginning of his second year at NESCol was considerably more invasive than it should have been. After having a tumour removed from one of his kidneys, Connar was unable to attend College in person for many weeks.  Much of the course was practical work at this point, crucial for achieving his HND. However, he dug deep and put in the extra work, doing what he could from hospital and subsequently from home when he was well enough.  Connar kept in touch with his lecturers throughout and thanks to technology was able to join in from home with the practical lessons that were delivered during this time.

When he was well enough to physically return to campus, Connar worked incredibly hard to catch up.  Doug Fraser, Curriculum Manager for Science at NESCol said, “Connar really put the effort in and reached very high levels of performance, not something to be underestimated having missed so much.  This alone deserves admiration but, in addition, he managed to gain a very high A grade in his graded unit, which allowed him to secure a choice of places at university. His graded unit project involved a comparison of the chemistry of Speyside vs Island (peated) malt whiskies. Connar’s interest in this field was in part kindled by the excavation of an illicit still, which had been operated by one of his ancestors“

Doug continued, “As well as being an excellent student, perhaps the thing that is most incredible about Connar is, despite all he has to face in his day to day life and the particular challenges the last couple of years have brought, he keeps a smile on his face! He has been an absolute delight to teach and is always upbeat, enthusiastic and friendly to all. He was very supportive of his classmates and regularly helped others with their studies.”

Talking about his condition Connar said, “I hope my story illustrates that receiving a cancer diagnosis doesn’t have to dictate what is next for you. Studying has been such a positive experience for me, challenging myself to learn new things when physically I’ve been limited has undoubtedly been rewarding for my mental wellbeing.”

Having successfully completed his HND, Connar has been able to progress directly into the third year of a BSc Applied Biosciences at RGU, one of NESCol’s 2+2 agreements with the university.

Connar said, “Coming to NESCol has been a great experience for me and I think it prepared me really well for the demands of uni.  I’m looking forward to learning more, achieving my degree and perhaps using it to go into teaching.”